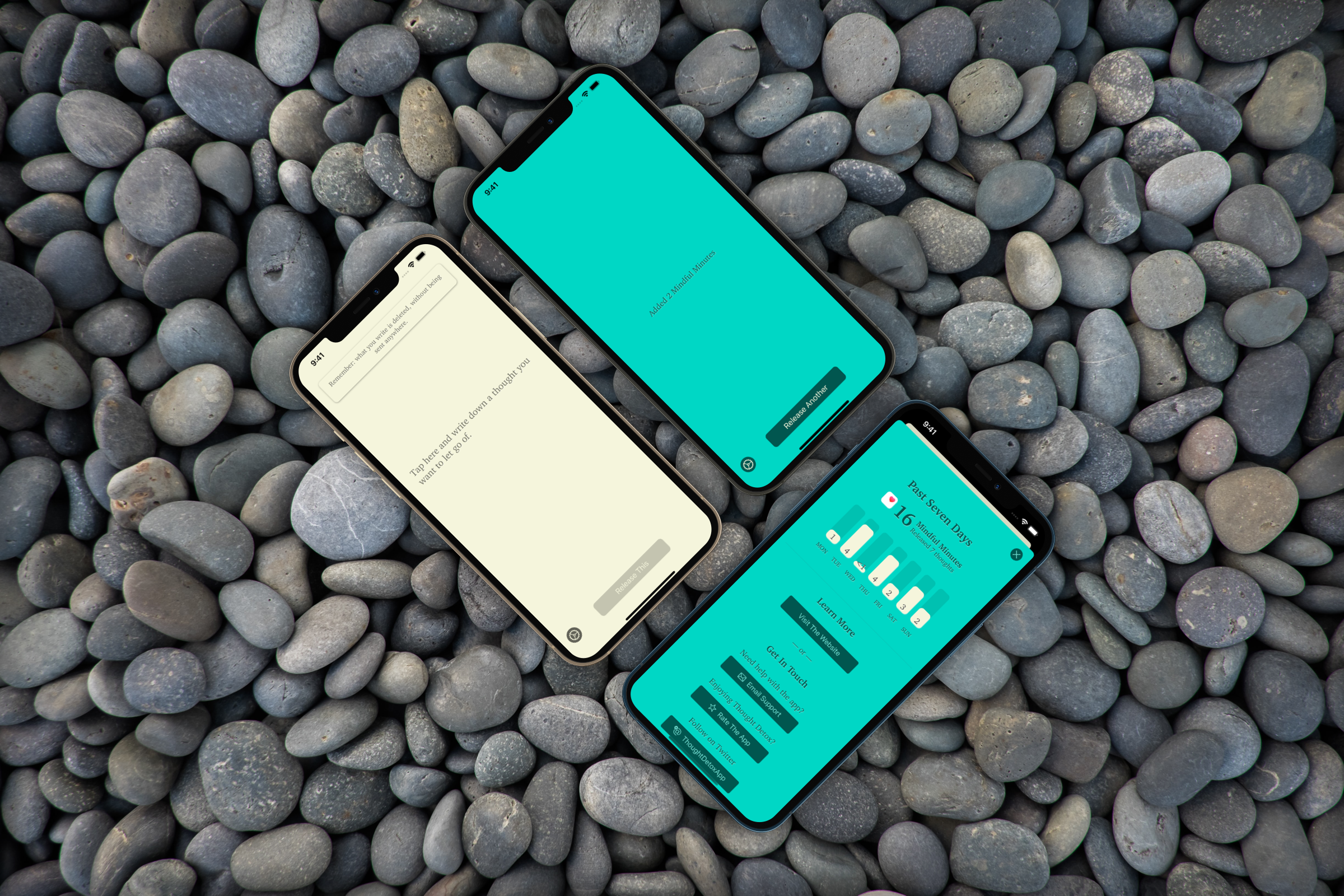 My latest iPhone app was launched yesterday! It's called Thought Detox, and it's meant to help you clear your mind by letting you write out your negative thoughts, and then discard them.

I've been sharing some thoughts on Twitter, and want to collect them all here.

The concept for Thought Detox is based on this article in Psychology Today. Essentially:

I experimented with this idea on the web in the form of this Glitch app — a way to transfer the concept to the digital domain.

I've had an interest in the idea of apps as tools for self-care, but I've also always been skeptical of their effectiveness — most seem to be game-ified, and I think it's important that these tools be built for usefulness, rather than engagement. I was invited to chat with Anil Dash about this on the Function podcast, and got to chat about that original web app as well.

Eventually, I decided that I wanted this to be an iPhone app, too, so that I could take advantage of some features that might make Thought Detox even more useful. So I got to work, building the thing in SwiftUI, setting up Mindful Minute tracking in the Health app, creating home-screen widgets, and integrating it with Wind Down.

This is the first app I've launched from my app business in five years or so, so I tried a few different things.

First, I made the app available for presale. It was approved for sale on the 7th of February, so I opened up pre-orders the next day, and announced it on Twitter:

Trying something a bit different with @ThoughtDetoxApp — it's now available for pre-order, at 2/3rd off, and will be going up to its full price two days after launch. https://t.co/GMBL8351Ul

I also set up a Twitter account for the app, and rather than link it on the Dropped Bits site, gave it its own landing page with a fancy .app TLD.

The landing page has some info on the app, an FAQ and a press kit. I've never created a press kit before, and I've never actually emailed any press contacts about an app before. This was harder to do than you'd expect — I procrastinated on it a lot, probably because of shyness. I tend to think my work is kinda not-bad until I have to show it to the public, and then I get pretty nervous about it not being good enough.

As an aside: a huge thank you to Christina Szilbereisz for designing the landing page. This was her first design project shipped into the world, and it's ten times better than anything I would have come up with. I love the colour palette, I love the layout, I love how clean it is.

I've also launched the app on Product Hunt. There was some weirdness where I launched it on the site yesterday, but about halfway through the day it decided I was only launching it today, and no matter what I did, I could not change that back. 🤷🏻‍♂️

I don't have a great frame of reference for what “doing well” looks like on Product Hunt, but it's driving a decent amount of traffic to the website (that's right, web analytics are publicly available for the site).

Anyways, it's been exciting to launch a new thing, and I hope you find it useful. I'll post updates every so often here, and if you want to keep up to date with my app business, I publish a weekly newsletter every Wednesday, and share business stats in the first article of every month.

Remember, it's still on sale until tomorrow!